Facebook
Twitter
Linkedin
Email
Stan is a C-level executive in his late fifties.  He’s done well, thriving and progressing in the volatile, high-pressure world of healthcare. Also, like many at his level in this chaotically-evolving industry, his career was recently disrupted when he was laid off, despite a stellar performance record, following the merger of two health systems.
Rather than withdraw and lick his wounds, Stan wisely invested in a career-transition program that equipped him to re-enter the industry at a level very close to what he was when laid-off.  His successful re-entry happened in just under six months, about half the amount of time re-entry takes for most execs at his level.
I connected with Stan just as he was wrestling with which of two attractive offers to accept to continue to move his career forward – a situation I consider to be a “high-class problem”.
We fell into a brief conversation about “what’s next” for him after this next gig which led to an exchange about whether or not he had given much, or any, thought to his post-career life.
Not surprisingly, he hadn’t wandered very deep into that misty territory.  Right now, it’s still all about survival in an evolving, unpredictable industry and continuing to “accumulate” to prepare for whatever that final stage is supposed to look like.
As I probed with a few questions that work well to penetrate this veneer, I uncovered an angst about this looming life-phase that, understandably, gets easily shoved to the background when faced with having to cover a sizeable mortgage and college tuitions – and, most likely, a “bigger than a bread box” lifestyle.
Stan’s initial response was the typical “I guess we’ll figure it out when we get there”. But as the conversation progressed, he acknowledged that he has had recurring thoughts about what he wanted his life to count for and that it couldn’t simply be wrapped up solely in having been a successful healthcare exec.
When I remind folks like Stan that this post-career third-age could be nearly as long as their career phase, most will pick up on the significance of not entering into it casually and unplanned.
I asked him how he would handle going from 110 miles-an-hour to zero.  I sensed that the question turned on some new lights.
I left it there with Stan. He agreed that the two of us need to reconnect in the next few years to continue the conversation. 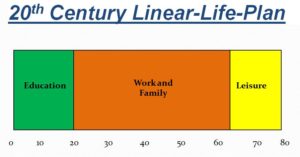 When I do reconnect with Stan, I’m going to remind him that he, like most, is operating under the model of a three-stage life (learn-earn-retire) that “taught us that this is a one-tank journey” where we may “find ourselves running on fumes as we realize it takes two tanks of fuel to propel us to a  fulfilling lifelong journey.”
I love the analogy, so I’m stealing it from Chip Conley and his book “Wisdom at Work”.
Yes, I understand – few of you reading this are, or were, at a C-level.  But that doesn’t change the argument that most of us need to be wary of this uncharted, unmapped territory.
You wouldn’t attempt to negotiate Chicago with a map of Des Moines. Yet we’ll enter the third-age on fumes with a one-tank mindset built around an 84-year old lifestyle model.
How many other 84-year old methods or tools do you still have operating in your life?
The more conversations I have with retirees – exec and otherwise – the more it becomes obvious that there is a price paid for winging it into retirement.  A big chunk of the price is the loss of the valuable early years of the third-age when energy is still high and the accumulated and transferable skills and experiences have not gone stale.
I’m told that, in Australia, the government has a program called “Long Service Leave” which mandates two months of additional vacation for every ten years of continuous service with an employer.  It sets up an opportunity for an extended break before transitioning into the retirement phase.
In the U.S. – well, I’m not holding my breath we will ever see anything similar.  Adult life here can “feel a bit like a run-on sentence that goes on too long without some punctuation” in the words of Chip Conley.
We are seeing more kids taking “gap years” after high school or college. But what about adults.
Again, I’ll share Conley’s perspective:
“But why should eighteen- or twenty-two-year-olds be the only ones entitled to some punctuation, when they’ve barely even begun writing the run-on sentence of adult life?  What about fully-baked adults who just need a little space to pause, to hit refresh, or to rewire? Luckily, as more and more people are liberating themselves from the three-stage model of life, the idea of a lengthy sabbatical in midlife is gaining currency”.
With that perspective, here’s some advice for any of us contemplating this fuzzy “what’s next”: I’m in the pilot-phase of a course designed to address these, and other, pre- and early-retirement challenges.  It’s working title is “What’s Next? Developing A Post-career Roadmap: Transitioning To a Balanced Lifestyle of Labor, Leisure, and Learning”. If you would like to know more about this offering, drop me an email to gary@makeagingwork.com for more details. ___________________________________________________________________ ABOUT THE GUEST AUTHOR: Gary Allen Foster is an executive recruiter, retirement and career transition coach, writer, and speaker. He is an over-70 portfolio-career guy and audacious ager dedicated to helping folks in the over-50 crowd adopt a new perspective on how to live longer, live better and with more purpose in the second half. He coaches, speaks and writes publicly on the issues of mid-life career transitions, planning for purposeful retirement and achieving better health and greater longevity. Find his thought-provoking articles and get a copy of his free ebook entitled Realize Your Full-life Potential: Five Easy Steps to Living Longer, Healthier, and With More Purpose at www.makeagingwork.com. Gary Allen Foster Executive Recruiter/Retirement and Career Coach Highlands Ranch, CO 80129 720-344-7784 (O) 720-810-1300 (C) gary@makeagingwork.com www.makeagingwork.com https://www.linkedin.com/in/garyallenfoster

Here’s How Retirees Can Give Back With Their Skills

Starting a Business in Retirement: 10 Things to Know in 2022

Three Must Ask Questions Before Moving In Retirement

Hitting My Stride In Retirement

How Thinking About the Future Makes Life More Meaningful

They Still Have Bucket Lists In Their 90s